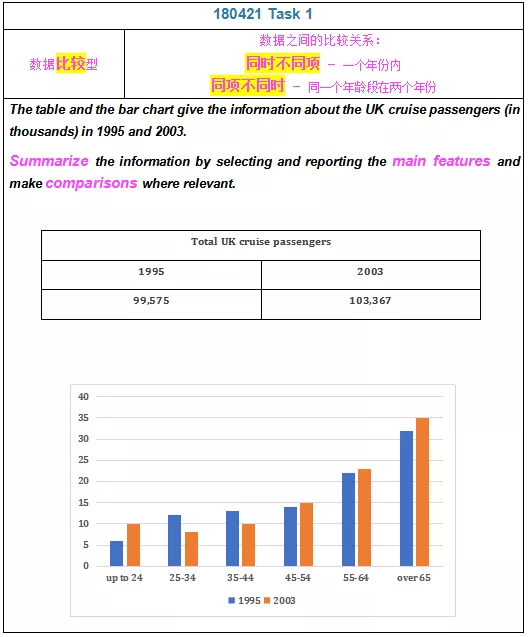 The table given shows the total number of cruise passengers in the UK in two years, which are 1995 and 2003. The bars are an illustration of thebreakdown of the two years’ numbers by age.

There were roughly 3,000 more passengers in 2003 than in 1995, when the number was 99,575. ← 比较级是典型的体现比较概念的句型。分组：以蓝黄柱的高低 → Exceptin the 25-34 group and the 35-44 group, the year of 2003 witnessed greater numbers of passengers in the other age groups, 根据主句的信息继续写 → and the group consisting of people aged under 24 is noteworthy, as passengers in 2003, whose number is 10,000, are nearly twice as many as passengers in 1995. ← 一篇有一个长句即可。A noticeable gap can also be found in the next two older groups;however, there was an opposite case that the year of 1995 received obviously more passengers than the year of 2003. In addition, older passengers were more than their younger counterparts in both of the two years. The greater numbers were significant in the two oldest groups, with the number of passengers surging [surge]to as large as 23,000 in the 55-64 group and 35,000 in the 65-and-plus group. 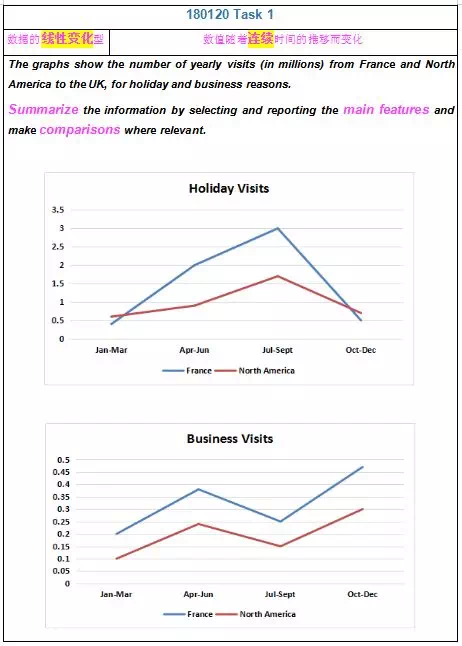 The lines in the two graphs are illustrations of the visits made by French and American vacationers and business visitors to the UK throughout a year.

In terms of the holiday visits, the general pattern is that the UK receivedmarkedly more French vacationers' visits than those of American vacationers.←   表语从句。写作步骤：上一句总写宏观后开始细化： With the number of French vacationers' visits increasing faster, ← 独立主格结构作状语表方式。 the gap keeping widening during the first quarter. It stabilized in the next two quarters, and the third quarter witnessed the respective peaks of the two numbers of visits – 3 million (m.) and 1.7m. Afterwards, both numbers of visits slid [slide] quickly to the original levels (0.5m and 0.7m).

Likewise, French travelers made more visits for the business purposethan American visitors; however, the numbers of visits made by the two groups had identical trends. 写作步骤：在既然提及trends,那就把trends说明白： To be specific, despite the slip during the middle of the year, both numbers increased, from 0.2m to 0.48m and 0.1m to 0.3m respectively. Meanwhile, it is noteworthy that the difference was within a narrow range of 0.1m to 0.2m constantly over the year.

Overall, the year saw that the UK received more holiday visits than the business visits and that the French made more visits than Americans. ← 宾语从句，注意平行。