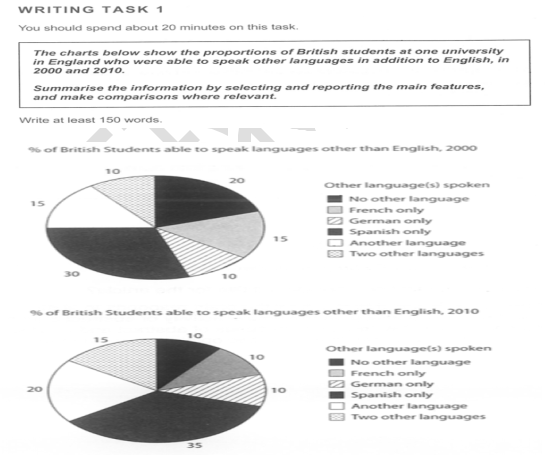 The comparison of the percentage of British students in a university in England who spoke different languages other than English is illustrated by these two pies.

In 2000, 20% of students there could not speak any other language, 5% more than those who could use French as a second language. 10 years later, the percentage of these two groups both shrank to 10%. However, the percentage of who were able to speak Germen only in addition to English remained stable at 10% in both 2000 and 2010.

To sum up, besides English, it is obvious that Spanish was the most popular language for those British students. Meanwhile, fewer students could not use any foreign languages, whereas more of them were able to speak 3 or 4 languages. 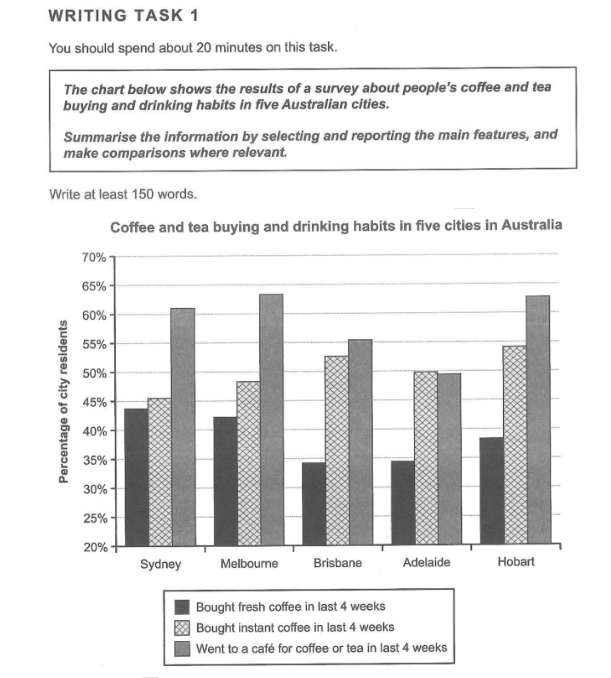 The statistics (measured as a percentage) of people’s drinking and buying habits on coffee and tea in five Australian cities from a survey is indicated by this bar chart.

To begin with, 44% residents in Sydney bought fresh coffee in last 4 weeks, a bit higher than Melbourne (43%) and Hobart (38%) respectively. Nearly 35% of people living in Adelaide did the same thing, slightly more than Brisbane (34%).

Additionally, in terms of those who bought instant coffee in last 4 weeks, figures of all five cities are higher than 45%, with Hobart accounting for the highest proportion at 54%, followed by Brisbane (53%), Adelaide (50%), Melbourne (48%) and Sydney (46%) in a decreasing order.

More interestingly, as for people who went to a café for coffee or tea in last 4 weeks, proportions of 4 cities are more than a half, with Melbourne occupying the largest percentage at 64%, Hobart 63%, Sydney 61%, and Brisbane a little more than 55%. Meanwhile, the figure of Adelaide is a slightly lower than 50%.

In summary, in 4 cities excluding Adelaide, the most popular habit is going to a café for coffee or tea since related figures are noticeably higher than the other two options. In the meantime, in Adelaide instant coffee is prevalent because almost half local people chose it during last 4 weeks. In contrast, purchasing fresh coffee is the last choice for people in all these 5 cities.

It is illustrated by this flow chart how instant noodles are produced in the production line. The whole process includes 8 clear steps.

In the first step, flour is transported to storage silos by trucks, and then it is mixed with water and oil in a mixer. Going through rollers, the mixture becomes dough sheets, which will be cut into dough strips and then processed into noodles discs over the next two steps. Thereafter, these discs are ready to be fried by cooking oil and then will be dried. In the next step, each dried disc will be put into a cup and then covered by some vegetables and spices. In the last step, those cups are labelled and sealed. Finally, the whole process is completed by those instant cup noodles being packaged.

In summary, for the production of instant noodles, flour, water, oil, vegetables, and some spices should be prepared as ingredients and seasoning. Meanwhile, after flour, oil and water is mixed, the dough will be rolled into sheets, cut into stripes, processed into discs, and deep fried. Subsequently, dried noodles discs will at last be packaged with some condiments.